Posted on January 2008 By Nova Hub No comments yet

Jan 2008 – Nova releases the latest version of VESALIUS Hospital Information System (HIS) on 11 Jan 2008. VESALIUS.geo as the newly announced product is known comprises of enhancements including Multi-Organisation Architecture (MOA), a feature which allows healthcare groups to operate a single system that is rolled out several hospitals.

The early adopter of VESALIUS.geo will be the Pondok Indah Healthcare Group where the system via VPN will be extended to a newly-built hospital Puri Indah about 20 kms away. Such architecture carries many benefits including supporting vision of One Patient-One Record that gives care providers access to the complete patient medical record.

The MOA architecture allows the running of a single system and sharing the same database for multiple institutions, a framework that also enables hospitals to differentiate the services that they provide, pricing they wish to charge patients and also centralise services such as purchasing. 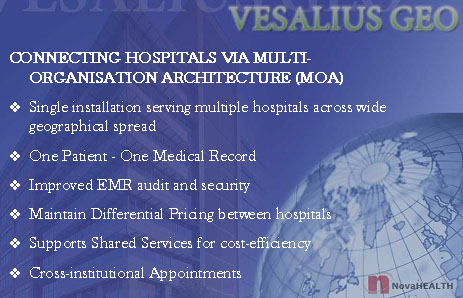 Another area which the product has made great strides is in Inpatient Clinical. The new product comes with a new Inpatient Clinical Desktop from which clinicians can effectively organize their ward rounds and perform their duties using functions such as:

From an IT perspective, VESALIUS.geo makes it possible for hospitals to pursue expansion without the need to invest heavily in additional IT resources. Support services such as system, database and user administration can be centralised. 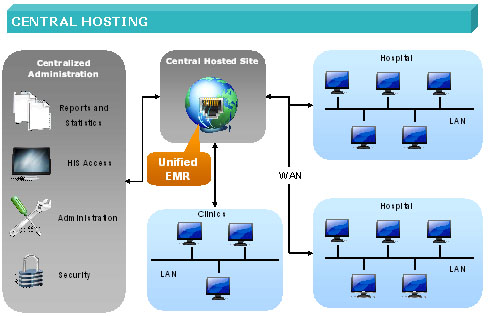 Users of VESALIUS.geo will also welcome a new interface that promises better user experience plus improved audit and security on the access and utilisation of EMR.

About VESALIUS
VESALIUS is a web-based system developed to integrate the functions of a hospital or hospitals within their hospital group to allow the sharing of information. Besides the administrative functions, VESALIUS encompasses the clinical needs of caregivers such as doctors, surgeons and nurses.