Posted on October 2010 By Nova Hub No comments yet

22 Oct 2010 – Public service officers from 15 countries converged into Nova’s office to learn about our e-Government solutions and our award-winning implementations. This visit is part of the “APEC Ease of Doing Business Workshop on – Reforming the Regulatory System for Construction” learning journey conducted by Building and Construction Authority (BCA) and BCA Academy.

The workshop was jointly organized and sponsored by Asia-Pacific Economic Cooperation (APEC), Singapore’s Ministry of Trade and Industry (MTI) and Ministry of Foreign Affairs (MFA). 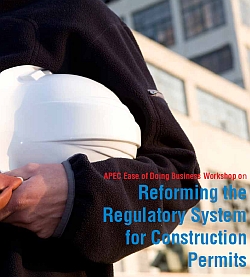 In 2009, CORENET was mentioned in a World Bank report as an initiative that aided the ease of doing business, helping Singapore to retain its Number 1 ranking in Ease of Doing Business.

The visitors were hugely impressed by the widespread participation of architects and engineers in the electronic submission of building and structural plans by in Singapore and City planning and management systems; plus the huge cost-savings it has brought to the industry.

APEC is the only inter governmental grouping in the world operating on the basis of non-binding commitments, open dialogue and equal respect for the views of all participants. Unlike the WTO or other multilateral trade bodies, APEC has no treaty obligations required of its participants. Decisions made within APEC are reached by consensus and commitments are undertaken on a voluntary basis.